Far too many American youth graduate from high school without real clarity around their career aspirations, and without a solid understanding of what they want from life, what they’re capable of, and what they can do for society. Gaining this understanding early would set them up for a much straighter line from education to employment, but for some it would also eliminate a lot of the angst and indecision among the college-going population as they choose schools and majors. 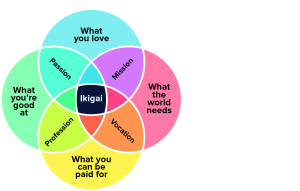 Doing something you love

For most young people, this pillar is clear. Who doesn’t want to do what they love? For most of the career-certain young people we surveyed (78% of them), this was a given. They reported that they were career-certain because “I think I will truly enjoy working in this field.”

Obviously we all want to pursue a career in a field about which we’re passionate. However, the confusion sets in when what we love either doesn’t seem like it will pay very much (think of young, talented musicians who are told they’ll never make a decent living in music), or it isn’t something that will necessarily put them in college. And for a lot of young people, pleasing parents by going to college is one of the major goals, and often forces them to completely abandon what they really love doing. Ikigai can help students understand that, with enough foresight and planning, what they love can actually intersect with more practical things like earning a decent salary, or performing an altruistic good for their community.

Doing something you’re good at

Just like finding something you love, it seems obvious that your career ambitions should align to something you’re inherently good at. For the career-certain students, that is certainly the case.  But surprisingly, many people who aren’t career-certain (47%) say that the reason for their uncertainty is that they just don’t know what they’d be good at. It isn’t always a given during the K-12 experience that a young person will leave school with this clarity or having had some epiphany about their innate talents. This is particularly true for those who perform poorly in academic settings, and who may be dealing with other personal challenges in life. Ikigai, though, can help a person find the common ground between the things they love and the areas they might not think they’re good at, but that warrant a little more exploration and effort.

Doing something the world needs

American students fall short in this area, and through no fault of their own. With so much emphasis on earning a good salary, and with the pressure of adult life close at-hand, it’s no wonder high school students leave school with more focus on their personal ambitions than what might benefit the community. Just around half (55%) of the students who had high career-certainty also said “I believe working in this field will benefit others.” Using the ikigai framework and putting in the career exploration work early can help any young person to understand that earning a good salary, being happy, and helping others are anything but mutually exclusive.

Doing something you can be paid for

This is clearly important, and very obviously so for those who are going to be accumulating college debt. But we know that a lot of young people have very little grasp of the realities of the working world. They make assumptions about salaries, and try (often in vain) to connect things they are good at to things that they loosely think might earn them the most. For example, think of a stereotypical high school athlete who is certain that her tennis ability will lead her in a straight line to winning Wimbledon and unlocking crazy money through brand sponsorships. For most students, even those with great talent, that is statistically very unlikely. But by using the framework of ikigai, she can be helped to understand that even though professional tennis may be a long shot, she doesn’t have to abandon her athletic talent and pursue something she doesn’t care for in another field. There are many ways to connect real ability to something that is guaranteed to earn her a decent income while she pursues her dream.

Finding the crossroads of these four pillars is the exception to the rule for most American students today. In fact, just 16% of middle school and 21% of high school students we surveyed are approaching ikigai. But this framework could easily benefit many more and help them more clearly see the path to happiness. Advanced planning, starting as early as middle school, is key. By helping young people set realistic goals and think in terms of these mutually overlapping pillars, educators can better prepare them for the realities of adult life while also inspiring them to put in the hard work to get there.