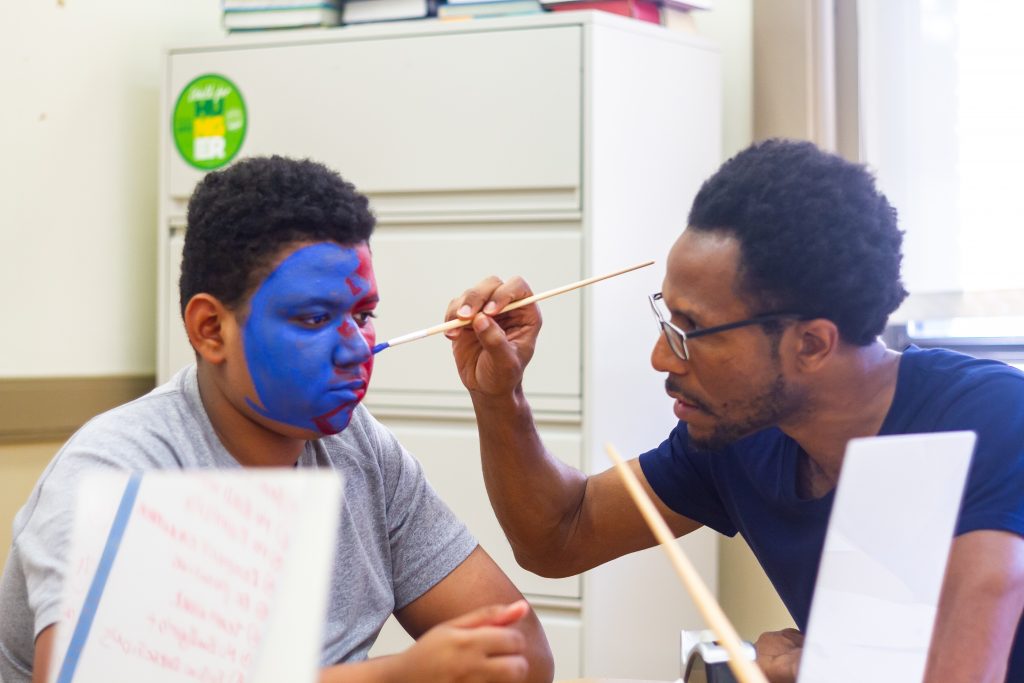 Many students in the Greater Boston area participate in camps or classes in the summer to stay busy, socialize with other kids their age, and continue academic learning. By partnering with community organizations, our Student Engagement team organized innovative activities and lessons for students to explore careers and make connections to their own skills and interests. Students experienced engineering through Snapology, expressed themselves with media artist and film maker Daniel Callahan’s Year of the MassQ project, and created their own tunes through Music Production Exploration lessons. Through this programming, about 350 students were served by programming provided by ASA during the summer season.

Claim Your Future
Students at various community partner locations learned about careers, educational choices, and financial planning through playing Claim Your Future, an interactive game where students selected a career and organized a budget based on that career’s median annual salary. During ASA employee-led sessions, students discussed their career goals, how to make educated financial choices, and how different careers compare. About 90 students participated in a Claim Your Future session at the Boys & Girls Club of Dorchester, the Boys & Girls Club of Charlestown, the Red Sox Scholar Foundation, Cambridge Rindge and Latin School, and the Youth Development Research Project at Northeastern University.

Career and Education Pathways Planning
Through a three-part series of sessions led by Student Engagement team members, students participating in the Youth Development Initiative Project at Northeastern University learned about student loans, scholarships, and budgeting. Questions were answered regarding FAFSA, scholarship searches, and the financial aid options at specific universities.

At the Boys & Girls Club of Charlestown, students completed an interest inventory that matched them to a career cluster that fits their unique skills and preferences. As the group navigated the various situations they had to choose from, they realized how many career options there could be. One student struggled between a lawyer or choreographer as potential career options. Nadia Chamblin-Foster, the Director of Student Engagement at American Student Assistance, explained that she could really do both, and bring those worlds together, as there is a level of choreography in cases and trials.

The group finished with a discussion about career options, how they can continue to explore the career fields they liked, and next steps they would take to achieve a career. “I have always been interested in becoming a special education teacher,” said a high schooler participating in the session.

“All of the interests I selected were about helping people. I matched to ‘Education’ as my career field, and now I’m really excited to learn more about becoming a teacher!”

Career Exploration: STEAM (Science, Technology, Engineering, Art, and Music)
Snapology
Legos, a beloved toy for more than 50 years, have evolved into a classroom tool used for engineering and building activities or lessons. Snapology has expanded on this educational practice to become a popular STEAM program used by schools, community partners, and at the Discovery Center in Hopedale. The program combines legos, robotics, K’Nex, and technology to create engaging tasks for elementary and middle grades. The tasks and lessons created by Snapology appeal to students with various learning needs, because the program allows students to use their hands to build and be successful in a variety of education-related skills. ASA teamed with Snapology to provide sessions at the Catholic Charities’ Teen Center at St. Peters and the Boys & Girls Club of Dorchester. 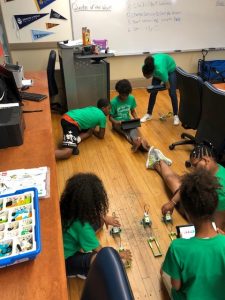 Snapology was provided at the Catholic Charities’ Teen Center over the course of five weeks, serving 72 sixth through ninth graders. During each session, students excitedly gathered in a classroom and listened to a set of instruction explaining what they would be tasked to build. Next, pairs collaboratively worked together to build the model, quickly addressing mistakes and celebrating success. Students then ran to the hallway where they got to test their model. On some occasions, the model was able to wheel around when pushed; other times, models moved based on coding on a tablet.

“This was so fun,” said an eighth-grader named Emmanuel at the Catholic Charities’ Teen Center. “I have played with Legos at the library, but it was nothing as cool as this. I love when we get to build cars and make them move with the iPad. I want to build Ferraris when I grow up.”

Thirty-two sixth through ninth graders participated at the Boys & Girls Club of Dorchester. After noticing their older peers building moving sweepers and racing gorillas, younger Boys & Girls Club participants asked to try it out as well. Twenty-four third through fifth graders were able to participate in two sessions and loved it so much that they gave a standing ovation the morning one of the sessions was provided.

“I have never seen a student so engaged in an activity,” said Joel Figueroa, Education Director at the Boys & Girls Club of Dorchester. “She was the most focused in Snapology this summer than any other activity.”

Media Arts
Art is a powerful tool; it allows students to express themselves, make connections with the world around them, and explore their abilities and talents. Daniel Callahan, a multimedia artist, shares his journey of becoming a professional artist by leading students through practices used in his MassQ series, which has been showcased in a gallery at the Museum of Fine Arts, Boston. Callahan, who is also a youth instructor at the Institute of Contemporary Arts, helps students express themselves by MassQing themselves with colorful paint and patterns through his MassQ series. 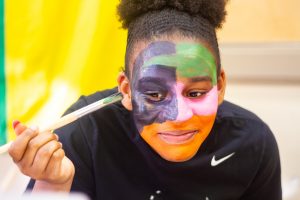 While masking yourself means hiding or not sharing, Callahan’s version of MassQing is showcasing a part of who you are. Through five sessions at the Catholic Charities’ Teen Center at St. Peters and one session at the Randolph Intergenerational Community Center, Callahan used his journey to help students discover their own artistic journeys. The sessions were an effective tool for socio-emotional learning, as students explored their emotions and identities by painting MassQs on themselves and others. After painting, students shared out what they created and what it meant to them, leading to revelations about themselves, others around them, and the world.

“Daniel was really good with the kids,” said Val Alves, Career & Workforce Coordinator at Catholic Charities’ Teen Center. “I even participated a couple of times. I would love for him to come back to work with us.”

Music Production
Music has often been a popular pastime for youth during any generation, and with boundless access to songs through streaming and technology, listening to music is often a way for teenagers to relax, express themselves, and learn about others. Bianca Clark, a multi-genre music producer who has been featured on popular podcasts Beats Grind and Life and the Beat Club, taught students how the music they love is produced. At the Catholic Charities’ Teen Center, Clark provided five sessions where about ten kids each session could create, compose, mix, and make a beat from scratch on music production software Propeller Reason 10. Music samples from drumbeats to synthesizers can be manipulated or adjusted in the software and layered to create a unique song. Clark modeled and scaffolded how to build the groundwork to a song, then put in the additional bells and whistles to create music that feels complete. By producing music themselves, students were able to understand how complex the songs they listen to are and how the process to build those songs works.